All the information summarized below is the result of the compilation of numerous international studies with the aim of understanding what can really be expected from hydrogen to reduce emissions from air transport.

Hydrogen is not an energy but a means of transporting it. Even today, the main source of hydrogen is natural gas, for the chemical industry, in particular the manufacture of ammonia and nitrogenous fertilizers, metallurgy… All over the world, hydrogen is classified according to its source of production:

Hydrogen can be stored in gaseous form but the most efficient solution is in liquid form at minus 253 ° C, the word “efficient” not being really appropriate because the part of the green starting electrical energy lost for storage and liquefaction is evaluated at 18% added to the energy loss compared to the electricity consumed for the electrolysis, 34% loss of about 52%. First conclusion: whenever it is possible to use electricity directly use hydrogen!

Hydrogen is the smallest molecule! The problem is the volume required, four times greater than kerosene for the same amount of energy. In appearance, energy in relation to weight is very favourable except that, it takes voluminous storage, and very heavy to ensure the pressure and especially for liquid cryogenic H2, to keep the temperature at minus 253 ° C.

Airbus announced in September 2020 that it would be able to present its first hydrogen aircraft in 2035. The architecture of the planes will have to be completely rethought, because the tanks are not suitable for carrying hydrogen”. Their size and shape should be reviewed as well as their number and position in the plane. “More than engines, these cryogenic hydrogen tanks are the main technological barrier.” They must be cylindri withstand pressure, therefore in the rear cabin as provided by Airbus. Loss of passenger capacity will require an Airbus 321 to carry the number of passengers today of an Airbus A320.

As for fuel cells, they are being considered today ground, APU or for aircraft with low passenger numbers over relatively short distances. Liquid hydrogen is only considered by Airbus for short haul or medium haul aircraft. For the
longer term, a flying wing concept has been devised.

Finally, for long-haul flights, only the use of synthetic fuel (synfuel) made from green hydrogen and CO2 captured in the air with a few additives is retained. In principle, this solution does not emit CO2 since it only rejects the one captured in the air during manufacture. In fact, the only really credible option is synthetic kerosene (synfuel).

As one expert says we will be faced with the “chicken and egg” paradox. For commercial aviation to launch hydrogen-powered aircraft, airports will need to be equipped to supply them. The investment will be very heavy and complex. There will be no question of delivering cryogenic liquid hydrogen in tanker trucks for storage. The losses will be too important and the costs that go with it. So either the hydrogen is produced by an electrolyser on site or supplied by a pipeline. Here again a pipeline to transport gaseous hydrogen under pressure will be much more expensive to build than a simple pipeline for kerosene!

Today most of the hydrogen produced in the world is extracted from fossil hydrocarbons, mainly methane. After the announcement in September 2020 by Airbus, of its Zero Emission project and hydrogen plan, researchers from a French expert group dedicated to aviation economy, Atecopol, have published criticisms, in particular concerning what quantity of green electricity would be required to produce needed hydrogen. Example: a large airport like Paris CDG if all the planes were powered by hydrogen.

Starting hypotheses: for electricity to be 100% green, it can only come directly from solar, wind or nuclear production system. On the general electricity grid, it would be a mix of different energy sources. For Paris-Charles-de-Gaulle airport with 100% hydrogen planes, the researchers calculated that it would take between 10 and 18,000 wind turbines, the equivalent of a French department, 1,000 km² of photovoltaic panels, or 16 nuclear reactors.

Impact on global warming and health

Regarding global warming, assuming that hydrogen is 100% green, no CO2 emissions but will remain nitrogen oxides emissions, contrails and the induced cirrus formation. So the zero emissions promised by Airbus is a lie.

Around airports, the noise will be the same unless there is a very profound modification of the planes in a second phase, the emissions of nitrogen oxides will be the same, for ultra fine particles no response found to date.

If many industries like to get hydrogen as energy or to store electricity, how to decide priority? What first?

In fact, for commercial aviation, the only credible option of using hydrogen is green synthetic kerosene. It can be manufactured on industrial sites in combination with chemicals for example. No special infrastructure at airports, same mode of transport, no major changes to aircraft engines. And, essential, a gradual increase in development is possible.

For Atecopol, this hydrogen path is neither more nor less than a dead end. “The question is not to be for or against aviation but to pose the question of its use and its role in a society, taking into account the physical and ecological limits which condition our future, and a fortiori the growth of air traffic is quite simply a vision above ground which comes up against clearly identified physical limits “.

As the airline industry suffers from the Covid 19 pandemic and has benefited from billions of state aids, commitments were needed. So what could be better than promising zero emissions in 2050 at a time when global warming seems to be increasingly, and fortunately, holding attention! 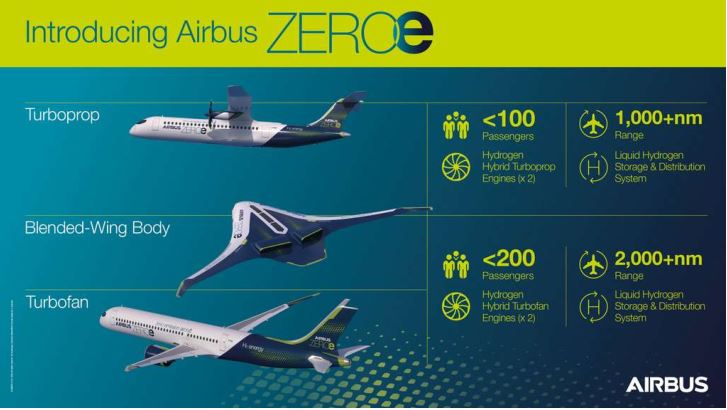