Fear that noise may lose out to climate

Of course, there are areas where their interests coincide – less car traffic on the roads; a move to rail for short distance flights – but there seems to be an increasing number of areas where there is divergence.

It probably started with wind farms. In their enthusiasm to back renewable energy many, almost certainly a majority, of climate campaigners ignored or dismissed the increasingly desperate calls from many residents of the very real noise problems they could and were causing. And there are potential conflicts emerging in aviation.

There is a lot of research and development into new aircraft taking place. Much of it is driven by the need for the aviation industry to deal with climate emissions.  Ideally, the choice should not have to be made between reducing noise and cutting climate emissions but, in reality, it might need to be.  UECNA will lobby and campaign to ensure that noise does not lose out to climate. 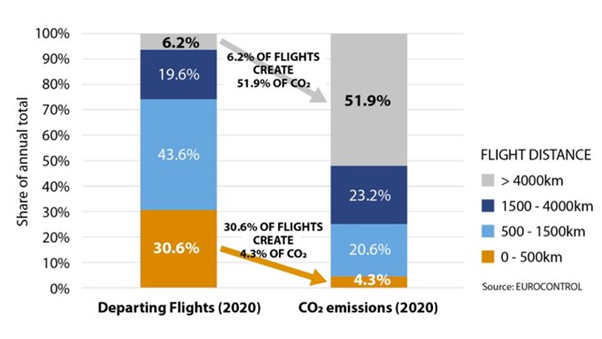 The diagram above is from EUROCONTROL. It shows that just over 50% of emissions come from the 6.2% of flights over 4,000km.  Noise campaigners would feel badly let down if governments and the aviation industry concentrated on cutting emissions from those flights. From a noise perspective 6% of flights do not cause a major problem.  The big problems are caused by the huge number of shorter distance flights.  For many of the 30% of flights which are less than 500kms, rail is a potential alternative.  There is also a greater chance of new technology being able to deliver aircraft which are both cleaner and quieter over a short-distance than for long distances.

Over the next few years there will be changes to flight paths at most airports in Europe.  This is because flight paths across the world are being modernized.  Air traffic controllers are moving from a ground-based system to a satellite system to guide planes.

The new system will allow planes to be guided more accurately.  It will mean narrower, more concentrated flight paths.  Routes will be more direct.  The system is known as Performance Based Navigation (PBN).

The new system will mean:

What will be the impact for local communities?

It depends how the flight paths are organized.  The new flight paths could be concentrated over a few communities.  That would reduce emissions per plane but would mean that these communities got all the flights.

Or the flight paths could be rotated to give communities a break from the noise. This would mean that more people in total would get aircraft noise and, if it meant longer journeys, emissions would increase, but most communities would get a break from noise each day.

In the UK, when decisions are being made noise is expected to be given priority over emissions at heights of less than 7,000ft. I would suggest that should be increased to 10,000ft and adopted by all European countries.

For further information read our paper Flight Paths are Changing