Transport noise disturbs millions of people in Europe. In 2000, more than 44% of the population of the European Union (EU) – 210 million people – were regularly exposed to road traffic noise averaging out at more than 55dB, the level the World Health Organization (WHO) considers to be unacceptably high (den Boer and Schroten, 2007). About 35 million were affected by rail noise. The figures for aircraft noise are less certain as the way in which they are collected is disputed but it runs into millions. For example, the aviation industry admits well over 3.5 million people in Europe are affected by night flights alone (European Commission, 2005). Worldwide, it is estimated that more than 30 million people are exposed to disturbing levels of aircraft noise (Ollerhead and Sharp, 2001).

Although the greatest numbers of people are exposed to traffic noise, there is evidence to show that people become disturbed more quickly by aircraft noise. 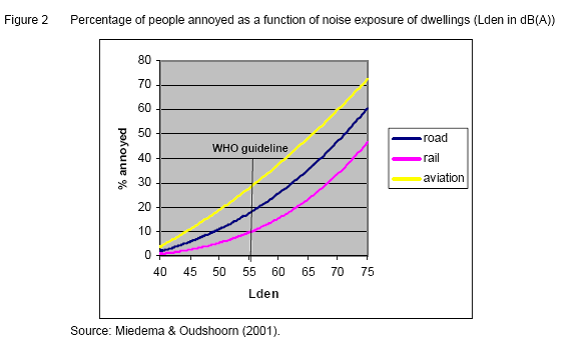 Figure 6.2 Percentage of people annoyed as a function of noise exposure of dwellings (Lden in dB(A)) (Miedema and Oudshoorn, 2001)
There is a lot of debate why people can become so disturbed by aircraft noise. It is probably because of the high level of low-frequency noise it contains. It is the same reason why stereo-systems, wind turbines and high-speed trains can cause serious noise problems.

The aviation industry admits there is little chance of the noise of individual planes being reduced significantly over the next few years by using new technology or better operating procedures (Ollerhead and Sharp, 2001). It is the reason why most aviation campaign groups are calling for a reduction in the number of planes in the skies.

Problems with the way aircraft noise is measured

Aircraft noise is averaged out over a given period. The average out noise includes the quiet periods of the day and the quiet days of the year. It underestimates the noise people actually hear. The method of calculating the average noise also gives too much importance to the noise of each plane and not sufficient to the number of planes. A report produced by HACAN, the organization that represents residents under the Heathrow flight paths, calculated that, by averaging out noise, one Concorde followed by three hours and 58 minutes of no planes was as disturbing as four hour’s worth of non-stop noise from Boeing 757s at a rate of one every two minutes (Hendin, 2002). Clearly not a reflection of reality!

Some systems of averaging are better than others. LAeq, used in many countries of the world, averages out the noise over a 16-hour day. Lden, the system used by the European Union, calculates the average for three different periods: day, evening and night. It then weights them to allow for the lower background levels in the evening and at night. The differences in the results produced by the two methods can be significant. At Heathrow, for example, fewer than 300,000 people live within the 57 LAeq contour (where noise averages out at 57dB over a 16-hour day) whereas more than 700,000 live within the 55 Lden contour.

This method of measuring noise allows the aviation industry to claim that the number of people affected by aircraft noise has fallen despite the big increase in the number of planes. It is just not true.

Sydney Airport in Australia uses a much more meaningful method to measure noise. Its method shows the number of flights that can be expected over an area during any given period, the number of hours with no planes and the likely noise of each plane.

The other big problem with the measurement of aircraft noise is that the techniques used do not fully capture the low-frequency content of the noise. This is because ‘A’ weighting, rather than ‘C’ weighting, is used to measure the noise. The World Health Organisation suggests that, if the difference between ‘A’ weighted and ‘C’ weighted results is more than 10dB, the use of ‘C’ weighting should be considered when taking the results (Berglund et al, 2000). There is a considerable amount of low-frequency in aircraft noise. When HACAN measured noise in West London, a few miles from Heathrow Airport, the difference between the ‘A’ weighted and ‘C’ weighted measurements was 9dB (Hendin, 2002).

The failure of the European Union (EU)

The EU refuses to set safe noise levels in its Noise Directives. It ignores the levels recommended by the World Health Organisation. The WHO has found that people in general start to get moderately annoyed when the noise averages out at 50dB over the day and severely annoyed when it averages out at 55dB. At night, the WHO recommends that the average noise should not exceed 45dB outdoors (Berglund et al, 2000).

Hendin, R. (2002) The Quiet Con, Heathrow Association for the Control of Aircraft Noise

This briefing sheet has been written by John Stewart and produced by UECNA.
We are a network of almost 40 airport community campaign groups across Europe. Our main concern is the noise for residents living around the airports and under the flight paths. We have regular meetings, organize conferences and take part in marches, demonstrations and other visible activities. We also lobby the European Parliament and the European Commission. If you would like to find out more about us you can contact us