This work is an attempt to summarise the main contents of a large number of sources on this subject.
The sources used are referred to in brackets. The sources are listed in the appendix in the order of
their use. The Graphs come from German sources and unfortunately could not be translated.

Introduction
Gradually, there is a growing realisation that in the next 20 to 30 years decisive things will have to
happen to slow down global warming. It is also becoming clear that if no action is taken during this
period, certain tipping points will be exceeded and developments will become irreversible. To put it
crudely: if decisive steps to curb global warming do not take place by 2050, things will become
uncomfortable on Earth towards the end of this century. More and more people are also becoming
aware that this is not a theoretical, distant date, but that the children who are now in kindergarten will
still be alive then. (0)

It is undisputed that global warming can only be slowed down if greenhouse gas emissions are
massively curbed. This includes, indispensably, phasing out the burning of fossil fuels. This
environmental policy approach to phasing out coal, oil and natural gas is also supported by the fact
that stocks of these energy sources are dwindling, their extraction becoming more expensive and
therefore uneconomic, and one day even more so due to increasing scarcity. This development
cannot be prevented even by new discoveries. So there are also economic aspects in favour of
developing alternatives.

As the following graph shows, the maximum of world production of “cheap” oil was exceeded
around 2005. 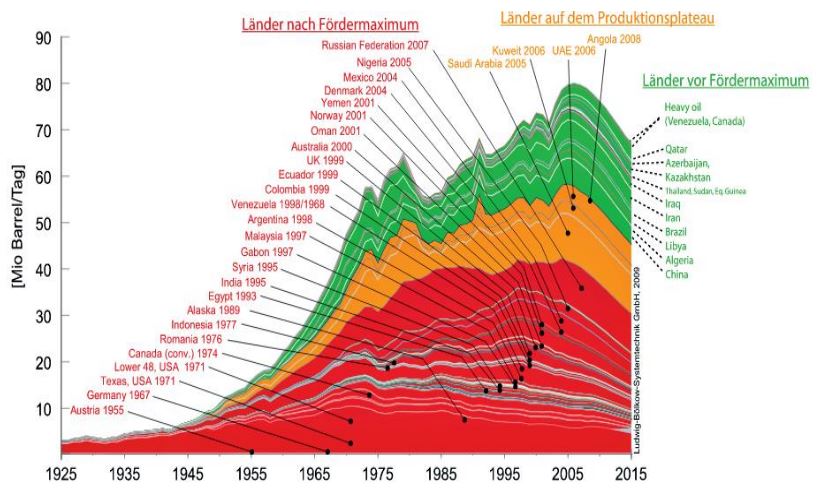 It is therefore essential to develop and make use of alternative forms of energy. This applies in
particular to solar energy. With the exception of tidal energy and geothermal energy, renewable
energy sources are more or less direct effects or consequences of solar energy. The solar energy
radiating onto the earth is 15,000 times the current energy consumption. It is therefore a question of
developing techniques to compensate for the disadvantages of solar renewable forms of energy.
Namely that they are discontinuous and have a lower efficiency than the chemical energy conversion
of fossil fuels.

In this case of renewable forms of energy, the focus is on hydropower, wind energy and direct solar
energy. All this energy sources are used to generate electricity. With the exception of hydroelectric
power, however, these forms of energy are not available on a continous basis, which means that
electricity generation can only be adapted to electricity demand to a very limited extent. This raises
the problem of power storage. Electricity can be stored directly in batteries, accumulators and
capacitors. The storage quantities are relatively limited. Indirectly electricity can also be stored in
pumped storage power plants or in various pressure chamber systems. Although larger quantities are
possible here, these are technically complex, capital-intensive and sometimes very space-intensive
processes. (1)

With this development towards significantly more electricity from wind and solar energy, hydrogen
is becoming increasingly important as an energy storage and energy carrier.

Download the complete article in English or in German

Also for the footnotes