The Illusion of Green Flying

This article is – with courtesy of  Finance & Trade Watch, Vienna, Austria – published on our website. You can download the complete report here.

Aviation: The Fastest Way to Fry the Planet

Emissions from aviation are rising more rapidly than any other sector of the economy. Te number of aircraft and the number of passenger-kilometres ﬂown is expected to double over the next 20 years – entailing 550 new airports or airport expansions around the world (86 in Europe alone). This could cause the greenhouse gas emissions from aviation to increase four- to eight-fold by 2050.

At the turn of the millennium, less than 5% of the world’s population had ever sat in an aircraft. This goes at the expense of others: residents exposed to noise and particle pollution from the planes, local ecosystems, future generations and of those in the Global South who are already bearing the brunt of the impacts of the climate crisis.

Pressure on the industry is rising. Aviation cannot anymore shirk responsibility for its contribution to the climate crisis. But how eﬀective are the aviation‘s greening strategies? Te brochure ‘Te Illusion of Green Flying’ examines the different measures:

Innovations in Aviation Technology: Green ﬂights would require quantum leaps in technology. Even the industry itself is now predicting that it will take at least 25 years to bring such innovation to technological maturity. And as aircraft have a lifespan of around 25 years, energy-intensive planes are likely to remain in use until at least the 2060s.

Sustainable Alternative Fuel: The ambition is to replace the highest possible proportion of conventional fuel with agrofuels. Te plan is not realistic because it would consume vast portions of land and risk food supply. This also risks land grabbing and would ultimately have minimum eﬀects on the climate. 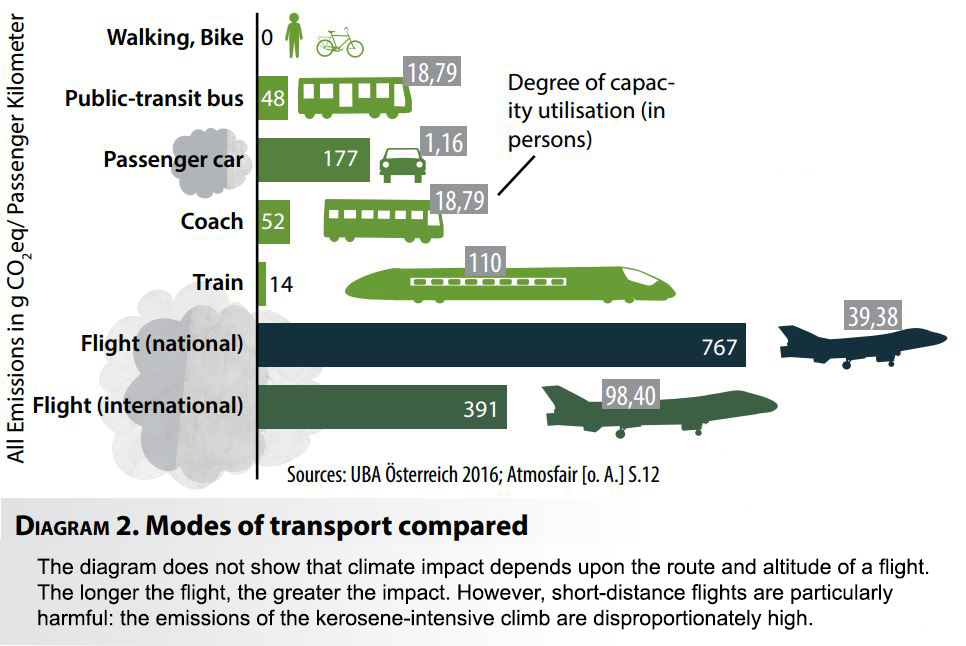 Airport Carbon Accreditation: Airports increasingly present themselves as green, especially when they face opposition against planned expansions like new runways. They can become supposedly carbon-neutral airports via the ACA certification scheme. For the ACA scheme, as with CORSIA, carbon oﬀsetting is needed. An airport can call  itself carbon neutral even though the airport‘s ﬂights, and therefore around 95% of the emissions, are not at all factored.

Biodiversity Oﬀsetting: Airports take up large areas which can be important for biodiversity and local inhabitants. Therefore, pressure is usually big to compensate for this damage and disruption; in some cases airports are obliged by law to compensate. Compensation means that an ecosystem can be destroyed, if nature is protected elsewhere. Social consequences of the destruction are ignored. Methodological ﬂaws in the ‘replacement’ of nature are widespread, and compensation often fails.

Climate Neutral Flights Oﬀers by Airlines: Almost a third of airlines oﬀer their customers carbon-neutral travel. For years, the oﬀer of climate-neutral ﬂights has helped to nurture the illusion that ﬂying green and carbon oﬀsetting are possible. Oﬀers of individual credits thus prepared the way for programmes such as CORSIA, which relieve a whole industry of the responsibility for reducing greenhouse gas emissions.

What is really needed: less air travel, not more

The brochure shows that carbon neutral growth remains an illusion, that the green strategies cause new problems and are neocolonial, and lastly the aviation industry uses them as a trade in indulgences and a diversionary manoeuvre. The aviation industry greenwashes its public image, avoiding or preventing more eﬀective strategies that would curtail its profit. Such approaches to reduce aviation growth, however, are needed urgently to both address the climate crisis effectively and equitably.

It is therefore essential to cut aviation‘s privileges: Finally, taxes on kerosene, ﬂight tickets and airport property need to be introduced. In the European Union alone, the losses in state revenue due to aviation subsidies amount to 30 – 40 billion Euros annually.

If night trains no longer run, booking train tickets for cross-border journeys becomes increasingly difficult, and the only transatlantic passenger ships are luxury cruiseliners, ﬂying will remain the preferred option for many. It is therefore hugely important to stand up for these alternatives. At the same time, resistance against airport projects can prevent locking-in an emissions-intensive, destructive form of mobility for decades into the future.
More and more actors are building alliances to apply pressure and make the needed change together – some of the actors and needed strategies are presented in the brochure.