Following the textual presentation, the data is also presented in tabular form for easier and clearer comparison, supplemented by the flight movement figures for 2019. I then present my findings on these data.

In addition, the aircraft movements (in the night-time marginal hours) must meet one of the following licensing requirements: 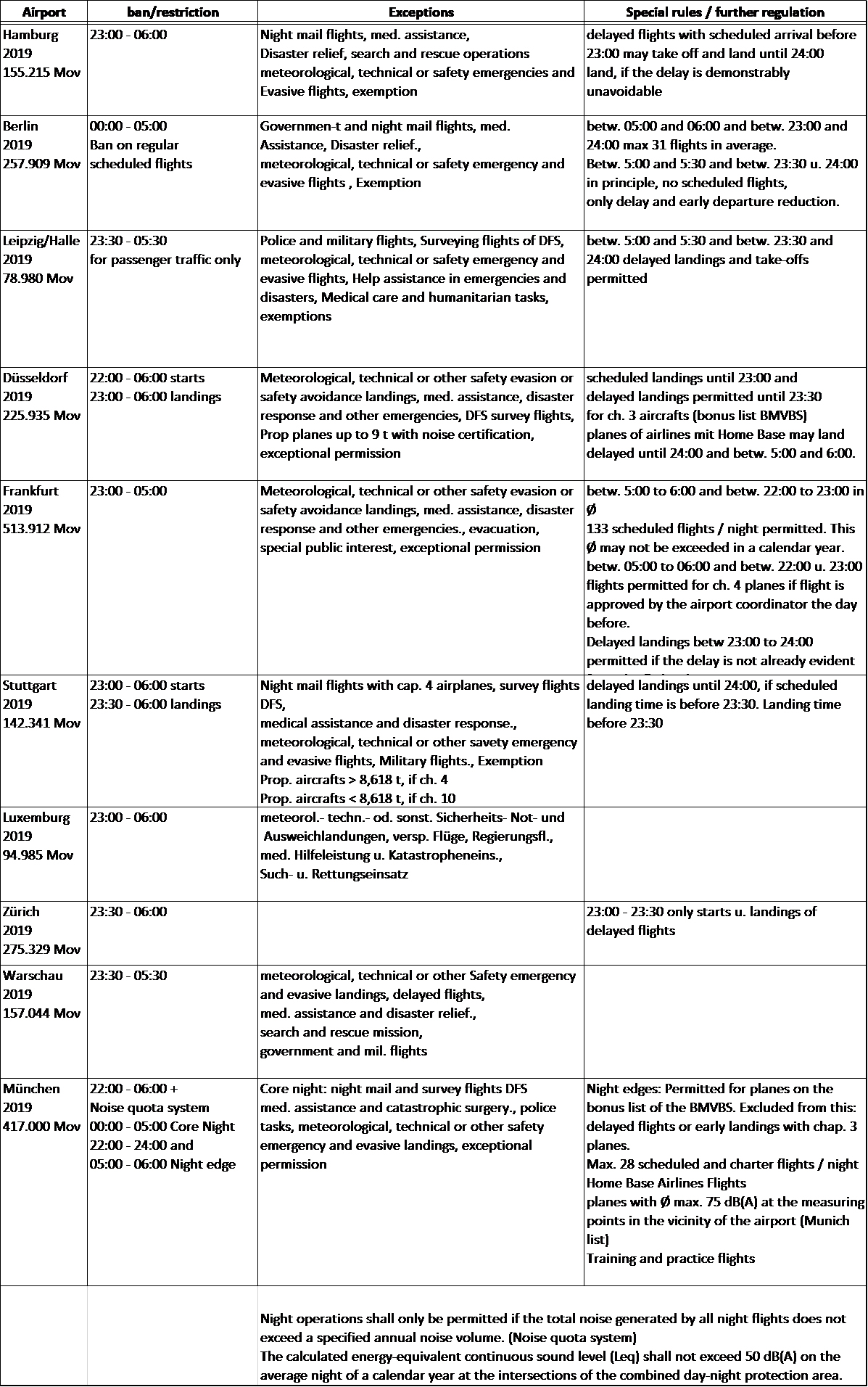 Analysis of the above data

A comparison of the start and end times shows that they are predominantly between 23:00 and 06:00. Some airports have later start times of 23:30h and 24:00h and earlier end times of 05:30h and 05:00h. An exception is Düsseldorf Airport, where the flight ban begins at 22:00 for take-offs and 23:00 for landings. A distinction between take-offs and landings for the flight ban also exists at Stuttgart Airport. There, however, it is 23:00 for take-offs and 23:30 for landings.

Munich Airport has a clearly different regulation. Here, the flight ban/restriction begins at 22:00 and ends at 06:00, but the first 2 hours and the last hour are designated as night border times, during which special rules apply. In addition, there is a noise quota here.

The (standard) exceptions show a relatively uniform picture. Some types of such exceptions, although not completely uniformly formulated, occur at all airports, others only at some. It is striking that no exceptions at all are provided for at Zurich Airport. It would therefore be necessary to check whether these exceptions (or basic flight authorisations) are regulated elsewhere.

Exceptions that occur everywhere are:

It would probably be necessary to investigate when the individual night flight bans were enacted and whether more specific older formulations are not contained in more general more recent ones. In any case, these exceptions do not mean the large number of night flights, possibly with the exception of night mail flights. Figures on this could not be found.

These regulations mainly deal with the handling of delays and early arrivals. These regulations appear similar and yet are quite differentiated. This ranges from the provision that delayed flights are permitted up to 1 hour after the start of the night ban if the delay was demonstrably unavoidable, to numerical limits on such flights, restrictions according to noise classification and additional exemptions for home base aircraft. Frankfurt allows an average of 133 scheduled flights/night, whereby this average may not be exceeded in a calendar year. This means a cap of 48,545 scheduled flights per year between 22:00 and 23:00 and between 05:00 and 06:00. In addition, flights of Chapter 4 aircraft are permitted during this time if they have been approved by the airport coordinator at the latest on the previous day. Furthermore, delayed landings between 23:00 and 24:00 are permitted if the delay is not already apparent from the flight plan.

Munich Airport has a completely different regulation. Here, flights by aircraft included in the bonus list of the Federal Ministry of Transport, Building and Urban Affairs (BMVBS) are permitted during the night margins. Exceptions to this are delayed and early landings with Chapter 3 aircraft. In addition, a maximum of 28 scheduled and charter flights per night are permitted from home base airlines, which cause a maximum of 75 dB(A) of noise at the measuring points in the vicinity of the airport (Munich List). Furthermore, training and exercise flights are permitted during the night hours.

In Munich, there is also the fact that night flight operations are only permitted if the total aircraft noise generated by all night flights does not exceed a specified annual noise volume (noise quota). In addition, the calculated energy-equivalent continuous sound level (Leq) shall not exceed 50 dB(A) on the average night of a calendar year at the intersection points of the flight paths with the boundary line of the combined day and night protection area. However, it was not possible to find out how high the said noise quota is and how the 50 dB(A) is complied with at the said boundary line, or where it runs.

For all these special rules, one would need figures to assess them. Such figures for flights in the individual exemption types could not be found. One figure for Frankfurt Airport can be mentioned here. By the end of August, 24,144 aircraft movements were carried out between 10 p.m. and 6 a.m. in 2019. This corresponds to 7.1 per cent of all take-offs and landings.

Nevertheless, it is very interesting to compare how night flight restrictions are regulated at the 10 airports listed.