Following the opening of the new runway at Frankfurt Airport in October 2011, the quality of life has been significantly reduced due to noise and pollutant emissions in the Rhine-Main region. A simultaneously introduced night-flight restriction (restriction between 11 p. m. and 5 a. m.; however, landing is permitted between 11 p. m. and midnight if there is a delay which does not already result from the flight plan design) has brought a relief, but the restriction is increasingly being softened by more and more landing aircraft between 11 p.m. and midnight. The low-cost airline Ryanair, which has been based in Frankfurt since last year, is particularly noticeable here.

A current graphic of flights during night-time at Frankfurt Airport: (click to enlarge) 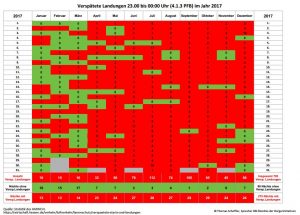